skip to main | skip to sidebar

This Is our Village

BROWN & BROWN INSURANCE PROGRAM FOR OUR VILLAGE - DON'T MISS IT Something to ponder for those fighting the Golf Course:
Copy and paste the link below.

http://www.nytimes.com/2014/11/28/nyregion/with-naming-rights-perpetuity-doesnt-always-mean-forever.html
Posted by Marc at 4:53 AM No comments: Links to this post

How dare you write on your blog that I called you anti-Semitic names. I also never called you a staggering drunk, a liar, until now, and thief. I am now calling you, Esther, a liar. I wrote on your blog that I think you are one of the nastiest people around and enjoy calling others names as you call me a moron. Yes there is a federal law against hate speech. Well reread your blog and see what hate is as you seem to spew it out. If, as you say, I am a moron, name calling, then all I can say to you is, it takes one to know  one.
Posted by Grace at 10:59 AM 2 comments: Links to this post

There is a teenager who has been living in Century Village for over a year now. Officially the condo is rented by the parents but they live elsewhere and the teenager lives here, transforming the condo into a college dorm with all the shoot-them-up games that resonate all around. They are cheating and they know and have been warned, but... my question, though, is:

how can a teenager obtain a pass that allows him/her to roam around the Village at will and also reside full-time in the Village?

Apart from jumping the fence, he/she has to go through the gates.

Is there such a thing as a yearly pass for guests?
Are there temporary passes that can be extended indefinitely?
What part do the transponders/stickers play in this? Can a teenager, who is using a car with a transponder/sticker obtained  by the parents, slip through the gates EVERY DAY, and, at times, more than once a day, without raising flags?

I understand passes are source of income but I believe that they are primarily and exclusively issued to protect the Villagers who are entitled to live here from those who are not.

Posted by Francesco at 10:46 PM 2 comments: Links to this post

Where the Malcontents go, Trouble always seems to follow:

From Gary's World Blog...
Witnessed
Earlier I posted a remark about how Marilyn G. challenged the right of Ed Grossman to be in theCONGREAGATION ANSHEI SHOLOM and ask to talk with the President. The following is the record as reported by a witness;
"I was present the morning is question. The question Marilyn asked what was Mr. Grossman doing here. This question was directed to our president of the congregation. Mr. Grossman who was greeting members of the congregation as they exited the sanctuary. Mr. Grossman I believe asked to speak to rabbi Korman. The rabbi may have told Mr. Grossman to see him at the conclusion of our services. Mr. David   Israel is not a member of our congregation and neither is Mr. Grossman. Congregation Anshei Sholom has never expelled anyone from our services. Anyone is allowed to enter and worship with us. Rabbi Korman may not have known why mr Grossman wanted to see him. I believe that rabbi Korman told Mr. Edward Grossman that the rabbi cannot get involved in village politics. After that several arguments broke out and i don't really know what else took place.   George m Nathan, member of the board of trustees of congregation anshei Sholom. I should have responded to this message much sooner.  I am trying to clear up old stuff and delete from my email list."
From: "The Century Village Messenger Club" <thecvmessinger@gmail.com>
To: "nathan, george" <gnatrx7@comcast.net>
Sent: Monday, November 3, 2014 3:05:14 PM
Subject: Why Worry?
Posted by Plcruise at 2:50 PM 4 comments: Links to this post

NEW MET VS OLD MET THERE IS NO COMPARISON ( IMHO )

-
Well, I suppose this will ignite some friendly controversy. The Lincoln Center house is undoubtedly very nice, I have seen but one opera performance at Lincoln Center, I was not impressed. Thus, virtually all of my experience with New York opera was at the old Met located at 39th. street and Broadway. I attended the opera there from age 10 through age 16, and then was off to university.
-
The exterior of the building was nothing to brag about, but the key item was the acoustics, there was no garish stream of lyrics scrolling over the stage, and no microphones and over-amplification. The interior was designed, so that you could quite literally hear a pin drop on stage from the highest balcony, up near the ceiling. The photo above was taken circa 1937 (not by me). The house was magnificent!
-
Dave Israel
-
Posted by UCO President at 9:02 PM 1 comment: Links to this post

Dave Israel -
Posted by UCO President at 10:00 PM 4 comments: Links to this post

What happen to cameras of front gate?
Posted by Clarence H at 9:16 AM 5 comments: Links to this post

to trash or not to trash.

I received a complaint today, and actually doubt that too much can be done about it, but here goes anyway. The person spoke to me of the people that go around Dumpster diving.
The objection was in two parts, first was the hour of the dive... apparently around 11:30 pm. A man with a pickup going around diving in the dumpster, taking apart old furniture for the metal in it. He gave this person a fright and she apparently yelled for him to depart or she would call 911.

The second was that the person was diving in GARBAGE. Is there any legal way to stop this disgusting behavior?
Any suggestions?
Posted by Bob's Blog at 10:58 PM 9 comments: Links to this post

WHAT A "NIGHT AT THE OPERA"!

I wonder how many others enjoyed  last night's "A Night at the Opera" performance at the Clubhouse. Aria after aria from many famous operas was sung by the four singers: a soprano, a mezzo-soprano, a tenor and a baritone. There were solos, duets, and at least twice all four participated. There was a good turnout, and it seemed the audience got increasingly caught up in it all, As the first few notes of some of the later selections were sung, the audience, recognizing what was coming, would burst into applause in anticipation. I thought it was magnificent and hope there will be many more such Clubhouse performances of grand opera selections. Bravo!

Posted by Lanny Howe at 4:33 PM 3 comments: Links to this post

-
Dave Israel
-
Posted by UCO President at 4:01 PM 2 comments: Links to this post

Esther that is your name. My name is Grace. Only the closest of friends call me Gracie and you are not. You use that name to make some kind of a point that only your small brain knows. You obviously did not understand what I wrote and answered in lies about what I said. My remarks about the paving were, there was a town meeting with the paving company. The man from the paving company told us that if we paved over the cracks, they would eventually come back. I guess you didn't bother to attend or you were not a resident at that time. He was very clear that any person could understand. It went to the Delegate assembly and the delegates voted the cheaper cost to cover the cracks and low and behold they came back. Do your homework before you make charges! Esther, you are no queen!
Posted by Grace at 9:28 AM 2 comments: Links to this post 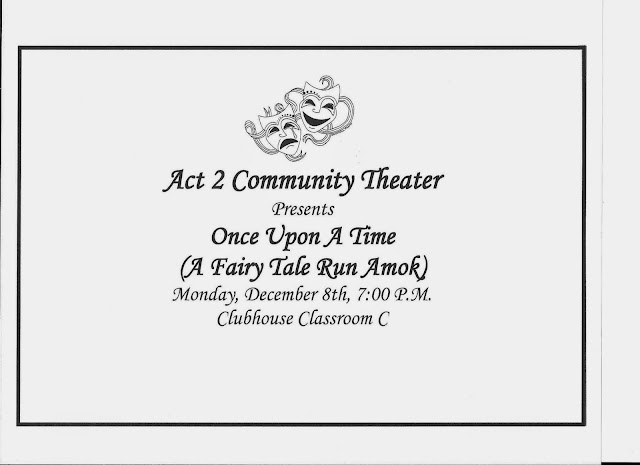 Posted by UCO President at 3:11 PM No comments: Links to this post


Whats the secret 2014std from David B. Israel on Vimeo.

VETERANS DAY - DO NOT FORGET

-
-
Dave Israel
-
Posted by UCO President at 7:13 PM No comments: Links to this post 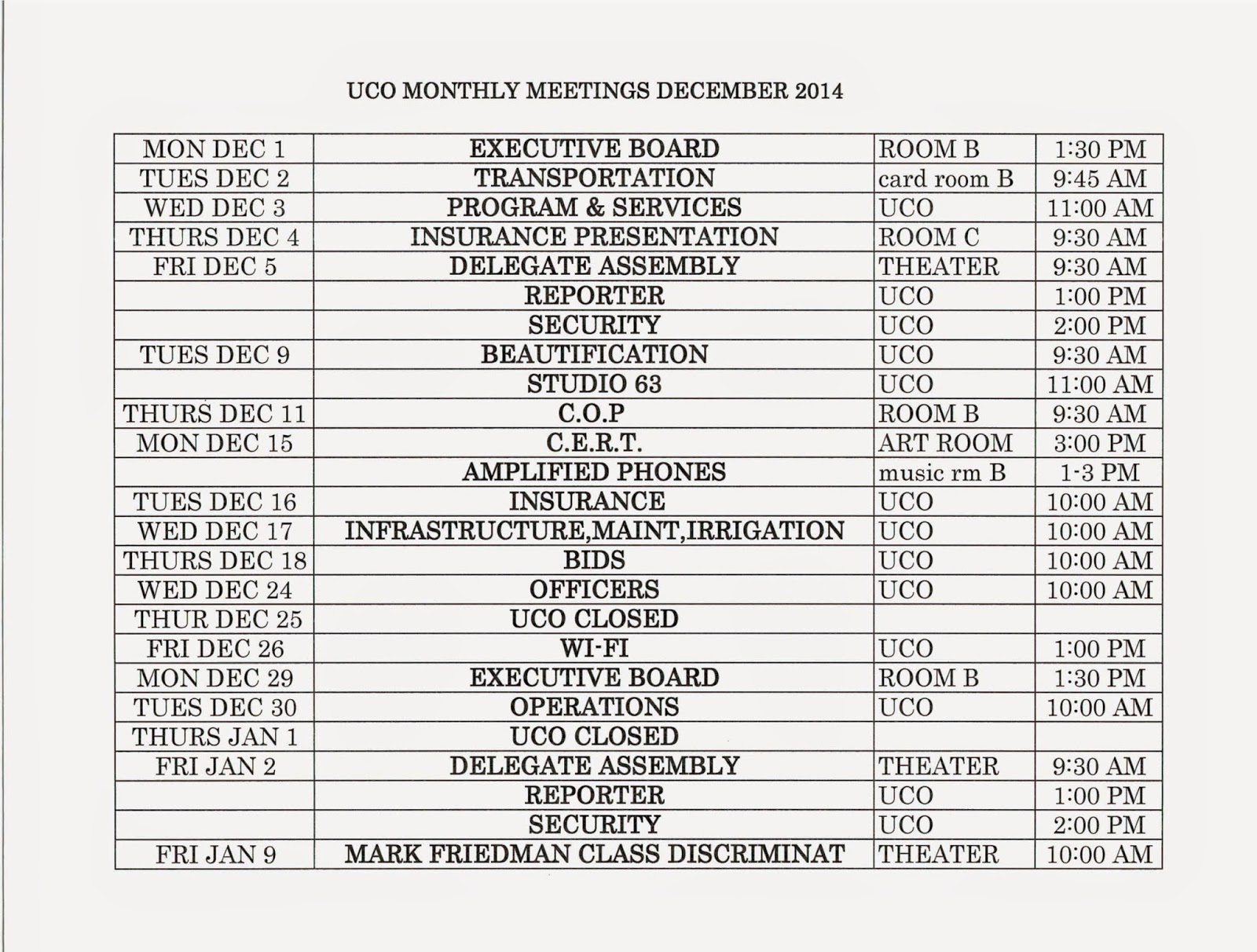 DELEGATE MEETING PROCEDURES. NEEDS TO BE SAID AND SAID AGAIN!

Below is a post from Elaine that if followed, would stop the silly and ignorant disruptions at Delegate Meetings (and maybe J. Karpf's demented Nazi salutes too).  It makes GREAT sense.  Just read it.

There may be people with fantastic ideas, but they need to go thru the process. Do not fling ideas at the Delegates without backup and full of unverifiable claims. That only causes confusion and wastes time.

If you have a brand new idea for the village, please DO NOT bring it untested to the Delegate Assembly. Go to UCO where there is a great experience base and the historical searchable database, most ideas are not new. When the idea is properly organised the UCO system will move the idea/plan to the Assembly. Then maybe we can finish on time.
Also spare us from historical regurgitation and whining, we understand some people have unique sensitivities but we should not waste the time of hundreds of residents.

In plainer terms, if you have not bothered to prepare, read, listen, or attend meetings to gather information, the Delegate Assembly is not the place to go to square one with elementary questions, and a lot of whining about having the right to speak and demonstrate your ignorance. 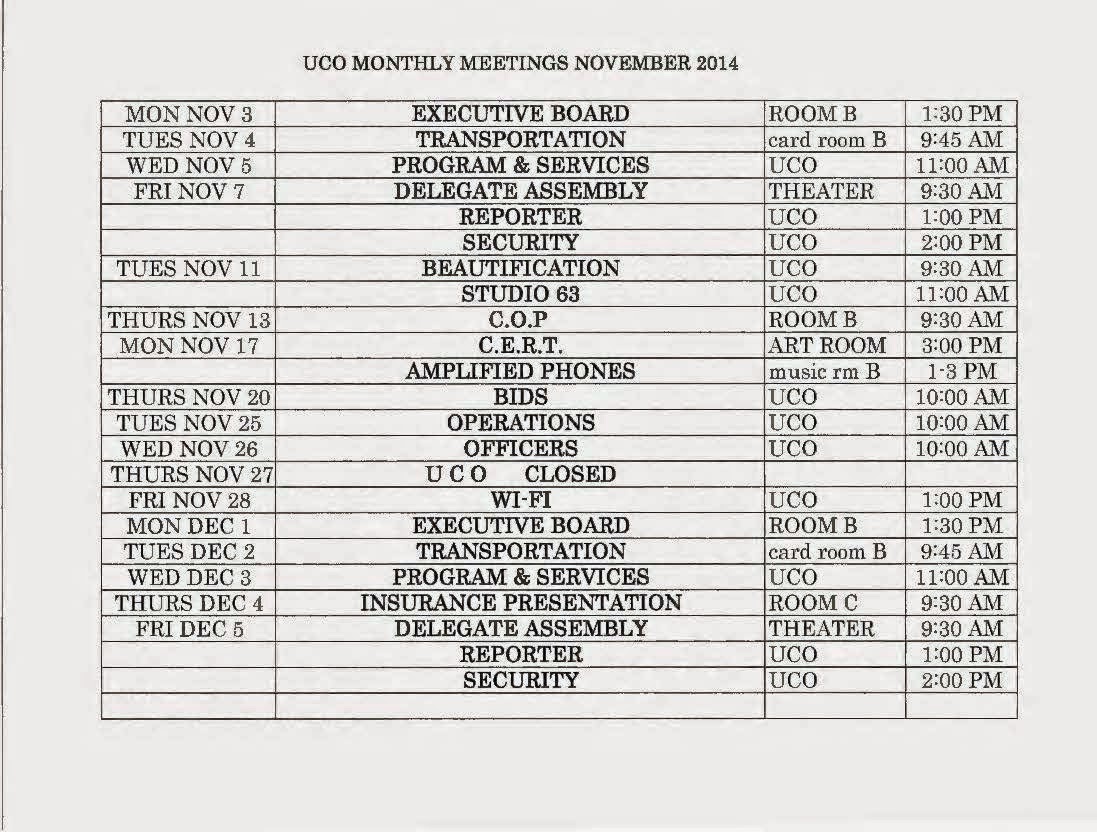 SPECIAL HOLIDAY CONCERT IN OUR THEATER 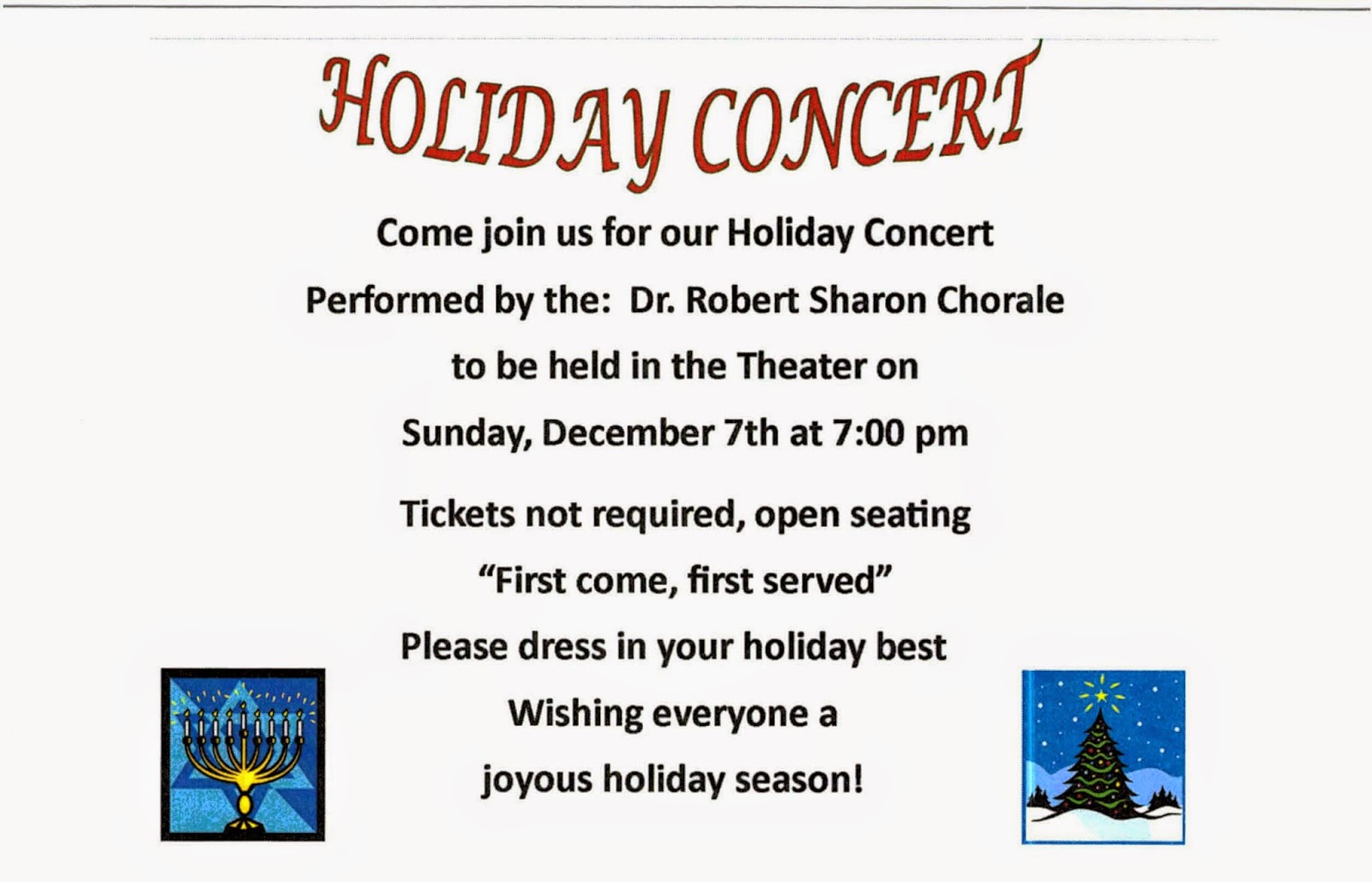 -
Dave Israel
-
﻿
Posted by UCO President at 4:58 PM No comments: Links to this post

SOME QUESTIONS FROM THE OFFICERS MEETING

This was a good way to see how well UCO has been running for some time now.  We don't get garbage slanted versions of what happened from Dave Israel haters on other blogs.


UCO is doing very well.  No money shortfalls.  Money in reserves.  Listen to the video recordings.

Posted by Plcruise at 11:43 AM No comments: Links to this post


Officers Committee October 28, 2014 from David B. Israel on Vimeo.
Posted by UCO President at 1:47 PM 2 comments: Links to this post

-﻿
THANKS to Ed Black and his committee for a wonderful job on the new security contract , this is one of the best contracts for security that I have seen since I am here......Thanks Ed for the many,many hours spent on achieving this result for the village.....BRAVO!
-
Posted by BARBARA C at 7:34 PM No comments: Links to this post

Nov 2014 Uco Reporter
Posted by UCO President at 10:52 PM No comments: Links to this post

HISTORY MADE IN OUR VILLAGE

creation of "OUR VILLAGE BLOG - PART 2"

Hi all,
It has been noted before that BLOGGER only allows 100 registered members. OUR Village BLOG, reached that limit some time ago, and thus I have been unable to accept many requests for membership.

We are going to try a new approach to resolve this problem. We have created a second "OUR VILLAGE BLOG", which is now under construction. You will see direct links at the top of both BLOGS, to transport you back and forth.
So, all who have sent me requests for membership without success, I'm sorry, but please try again, and you will be invited to register as a member on "OUR VILLAGE - PART 2"

Please send your request to nsasigint@comcast.net. This BLOG allows no anonymous entries, so include your name, address and phone number; which of course, will be held in confidence.

Let's hear from you all!